Real Bread Week 2021: Weed Killer Sandwiches Anyone? This week those of us who eat bread will may be celebrating Real Bread Week with a slice or two of deliciously indulgent real French brioche (the high egg and butter content gives it a rich and tender crumb), perfectly toasted and layered with a spoonful of Greek Yoghurt and your favourite berries.

Or maybe a couple of slices of traditional sourdough (not the Kleenex-inspired pap we have come to call ‘bread’) stuffed with our favourite sandwich filling: Bacon & Brie, Roasted Mediterranean Veg, Salmon & Cucumber, Cheese & Pickle, Ham & Mustard.

But, did you know that unless your ‘real bread’ is organic too, you’ll be enjoying residues of a toxic and most commonly used weed killer on the planet?

As far back as 2014, Pesticide Action Network (PAN) UK, using the UK Governments own data on pesticide residues in our bread, found that the most frequently detected pesticide was a highly toxic herbicide glyphosate: 63% (around two in every three supermarket own-brand and top brand-name loaves sold in the UK) contained traces of at least one pesticide and 25% contained residues of more than one!

Based on data from the UK government’s committee on pesticide residues in food, the report revealed that the most frequently detected was glyphosate. 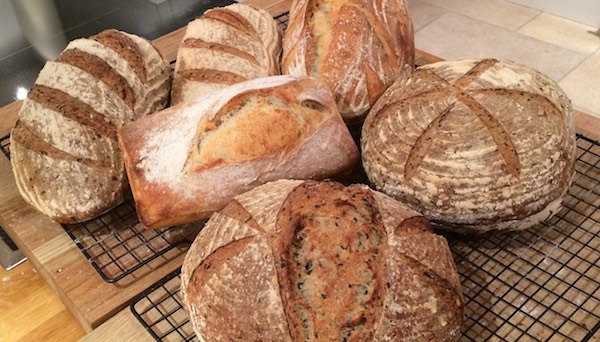 Glyphosate is found as a residue not only on many of the food products we eat, but also in our drinking and rainwater, wine and beer. Friends of The Earth points to the 2013 ‘Determination of Glyphosate residues in human urine samples from 18 European countries’ study by Medical Laboratory Bremen, which found traces of glyphosate in the urine of nearly one in two people tested. Tests have also shown that glyphosate is present in urine and breast milk in the USA.

Read more about pesticides in our food here and on our health here.

In 1970, Monsanto, a US-based multinational agrochemical and agricultural biotech corporation, found glyphosate to act as a broad-spectrum systemic herbicide. From 1974, Monsanto began to market glyphosate under the trade name ‘Roundup’ to growers, park keepers and keen gardeners all over the world as a powerful means of controlling weeds, making it the most used pesticide on the planet.

In countries like the UK with wet summers, where crops may ripen unevenly, glyphosate is used to clear fields of weeds before crops emerge in the spring and again to desiccate (dry out) crops just before harvest.:

“Applying glyphosate so close to harvest makes the likelihood of finding residues in food even higher…. if glyphosate ends up in bread it’s impossible for people to avoid it, unless they are eating organic. On the other hand, farmers could easily choose not to use glyphosate as a spray on wheat crops – just before they are harvested.”

(the late Peter Melchett, Director of Policy, the Soil Association)

As well as using glyphosate for cereal crops that finish up on our tables, 78% of UK oilseed rape (used as protein in animal feed, in processed foods; and in cooking and dressing oils) is desiccated with glyphosate before harvest. Might this be a bonus for farmers? No – trials by the Agriculture and Horticulture Development Board in England and Scotland have shown that there is no advantage and some risk in glyphosate desiccation.

“It should not be forgotten that since 2000, feed rations of UK farm animals, particularly poultry and dairy cattle, have included significant quantities of GM maize and soy which are likely to contain residues of glyphosate-based herbicides with obvious potential impacts on their gut microbiomes.”

Effects of glyphosate on the environment

Glyphosate indirectly impacts on birds and other animals by destroying weeds and wildflowers, habitats and food supplies. Because it’s water soluble, glyphosate has significant impact on the entire aquatic food chain, particularly on amphibians and has also been found to have adverse effects on earthworms, beneficial insects and bees.

Glyphosate binds micro-nutrients in the soil causing nutrient deficiencies in plants and is particularly destructive to soil heath: It impacts on soil fertility by upsetting the balance of beneficial microbial communities in soil and has stimulated the growth of fungal pathogens leading to a variety of crop diseases in ‘no-till’ agricultural methods.

While the manufacturers repeatedly insist levels of glyphosate in our food are safe, in 2015 the World Health Organisation concluded that glyphosate is a ‘probable carcinogen’. In June 2020 Bayer, who acquired Monsanto in 2019, agreed to pay more than $10 billion to settle tens of thousands of claims while continuing to sell the product without adding warning labels about its safety. The Bayer settlement covers an estimated 95,000 cases and includes $1.25 billion for potential future claims from people who may develop a form of cancer known as non-Hodgkin’s lymphoma.

Commenting on the Pesticides Action Network’s (PAN) 2016 wide-ranging, detailed publication ‘The Glyphosate Monograph’, Nick Mole, Policy Officer at PAN UK says: “it looks very closely at the health and environmental effects of glyphosate and refers to all the available peer-reviewed science.”

Glyphosate and our gut

Glyphosate works by interrupting a metabolic function: the shikimate pathway in plants’ cells When this pathway is interrupted, the plants die. Human cells don’t have this pathway, some pro-glyphosate supporters argue that human and animal exposure to glyphosate is harmless.

In humans, however, the gastrointestinal microbiome (our gut bacteria) does have the shikimate pathway, and other researchers argue strongly that glyphosate disrupts this pathway, exposing humans and animals who consume it via food to a host of health problems.

In terms of human health, the kidneys and liver are the main targets for glyphosate; in January 2017 researchers led by Dr Michael Antoniou at King’s College London found that weed killers like Roundup cause non-alcoholic fatty liver disease (NFLD) at doses thousands of times below permitted levels, establishing a clear causative link between the consumption of ‘real world’ levels of glyphosate.

One of the report’s authors commented:

“The findings of our study are very worrying as they demonstrate for the first time a causative link between an environmentally relevant level of Roundup consumption over the long-term and a serious disease, namely non-alcoholic fatty liver disease. Our results also suggest that regulators should reconsider the safety evaluation of glyphosate-based herbicides.”

A new study published in January 2021 confirmed that exposure to glyphosate/Roundup formulation, can disrupt the function of the gut microbiome (bacteria and fungi) and internal body systems with potentially serious effects on human health.

The Roundup formulation was also shown to be more toxic than glyphosate alone, supporting evidence that “the additional substances present in commercial products, collectively known as ‘adjuvants’, are not ‘inert’ as claimed by its manufacturers and regulators but highly toxic in their own right”.

The Soil Association’s ‘Not in Our Bread Campaign’ has long been calling for the ending of the use of glyphosate on wheat destined for use in bread and factory loaves.

The campaign urges farmers to stop spraying bread wheat with glyphosate; millers to reject grain that has been sprayed; and bakers only to accept flour if the miller can guarantee a glyphosate-free supply chain.

PAN UK tackles the problems caused by pesticides and promotes safe and sustainable alternative to pesticides.

The Real Food Campaign UK calls for our real food (and bread) to be produced in ways that support health – free from harmful chemicals and additives, in ways that support and restore our soils, our oceans and our natural environment and which respects plants, animals and nature.

The Real Food Solution calls for us to become more informed and conscious consumers and care where our food comes from, how it’s grown, raised and produced. The chapters It Starts in the Soil and Give Us Back Our Daily Bread discuss the impact of glyphosate and other agricultural chemicals on our food, health and planet.

Currently, glyphosate is licensed by the EU until December 2022, however its UK licence will continue to 2025.

What can WE do now?

Until the science on the health and environmental dangers of glyphosate can influence policy changes, we need to ensure it’s NOT on our plate. Whether a bread lover, baker, miller, retailer, hospital cook, college caterer, eatery or café owner, we can all SAY NO TO GLYPHOSATE!

This article has been updated from the article Weed Killer Sandwiches? NOT On My Plate! originally published by The Real Bread Campaign in 2017.

A former health research psychologist, Izabella is a whole-health expert, qualified Real Food Nutritionist, Health and Wellness Coach and a Ballymaloe-trained nutritional chef.  She supports women at midlife and beyond to re-ignite purpose and meaning to take back control of their health and create the radical, resilient health they want and deserve. Her approach focuses on whole-health creation, real food nutrition and lifestyle medicine.

A passionate advocate for joining the dots between food quality, regenerative agriculture and health, Izabella is an Ambassador for The Real Food Campaign UK, her book The Real Food Solution is an evidence-based treasury of wisdom for energy, vitality and better health for people and planet and a call to action to change the way we grow, source and cook our food.