Chocolate originates from seed pods which dangle off the small evergreen Theobroma tree native to the tropical regions of Central America.  They are quite large pods and contains about 20-60 beans surrounded by sweet scented white pulp.  It is the contents of the beans that provide the basis for chocolate. 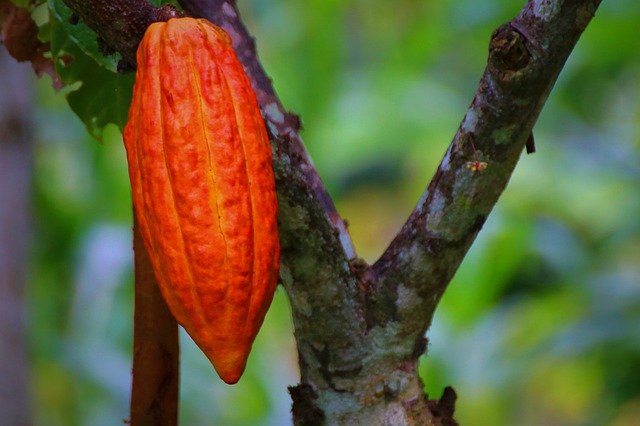 You might have noticed that some packets of chocolate deliciousness contain cacao (as in cacao nibs) while others show cocoa on the label (as in bedtime drinks).  We visited a chocolate factory in Grenada last Christmas with my father, who lives there.  They told us that cocoa was the term for the beans once they had been fermented and that cacao was the term for the raw bean but I understand there is no world-wide consensus on which term to use or when.

Once fermented the beans are dried, roasted, crushed and ground and about half the end result is cocoa butter.  Real chocolate is made from these two parts – the cocoa (which is brown) and the cocoa butter (which is cream coloured).  Sometimes when you melt chocolate, out blooms a whitish swirl which is the cocoa butter separating from the cocoa solids.  Chocolate makers prevent this by a process called tempering that re-establishes the butter crystals and creates the right sheen, snap and taste in the finished cooled chocolate.

The percentage listed on the packaging refers to the proportion of cacao and cocoa butter, as compared to all the other ingredients in the product.  100% chocolate means there is only cacao and cocoa butter in the product.  Manufacturers alter the relative proportions of these two to achieve the desired purpose, thereby chocolate designed for dipping and covering will have a higher proportion of cocoa butter so that it melts smoothly and remains glossy.  Some producers are also missing out the bean roasting part of the process to make what is known as raw chocolate, and claiming health benefits as a result of avoiding the high heat involved.

The higher the cacao content, the darker the chocolate but also the more bitter it tastes.  Things that taste bitter by the way, are generally good for us not least because they moderate food cravings.  Also, the darker the chocolate, the higher the mineral content. Cacao is a rich sources of several minerals including selenium, magnesium, chromium and manganese and it also contains flavanols, but the quantity varies depending on growing conditions and processing methods.  The flavanols in chocolate are marvellously good for us but we would have to eat a LOT of chocolate to get much in, so best to think of it as a treat food and aim to eat 70% or higher cocoa content chocolate to get these nutritional benefits.

Other ingredients are added to make chocolate eg sugar and vanilla and I consider these real foods too, mostly because my life would not be complete without chocolate and I have to admit that 100% chocolate is challenging to consume.  Obviously within this set of ingredients there are options and some artisan chocolate yummies might use coconut sugar, honey or agave to sweeten instead of cane sugar.  Remember that if the package tells us it is 70% cocoa, then it is likely to be 30% sugar with the calories and blood sugar issues that implies. 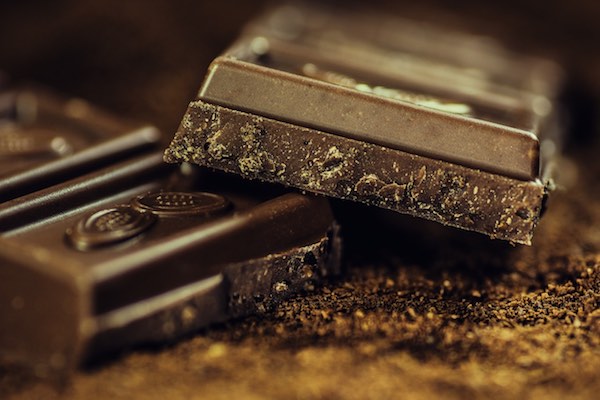 But, turning to mass produced food …. in most ‘petrol-station-chocolate-bars’ cocoa butter is replaced or supplemented with vegetable oil and palm fat because they are much cheaper ingredients and when used, the chocolate will not require tempering to keep it consistently brown but still has the nice ‘mouth feel’ of butter expected from confectionary chocolate.  In these chocolate products, sweetener is likely to be glucose syrup or something inverted as cheaper ingredient choices. Milk is likely to be from its processed fractions in the form of milk powder, whey powder, milk fat, lactose and milk protein, added because they are economic choices in place of cocoa butter.   Inevitably there will also be some emulsifiers to hold the ingredients together in a stable consistent form (usually E442 ammonia phosphatides often from soya lecithin or E476 polyglycerol polyricinoleate).   In my household, I refer to these as ‘test tube ingredients’, enormous effort has gone into finding a combination of chemical ingredients that are cheaper than real food but that bring the consistency, reliability, efficiency, long-life, the right colour or whatever attribute is being sought to the product.

In addition to those emulsifiers, the food label might offer up ‘nature identical flavouring substances’ but trust me, these are not real food either!

Perhaps the thing to do is to find an artisan chocolatier who uses genuinely real ingredients, mostly cocoa and not too sweet, that undoubtedly will be expensive but as a compromise, just eat much less of it and savour every delicious mouthful.  Something along those lines will be at the bottom of my kids’ stockings this Christmas if I am able to get out to our local farmshop before stocks dwindle.

Here’s hoping and a very delicious Christmas to you all. 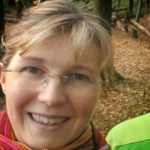 “I am a GP, wife and mother of two teenagers, who is and always has been passionate about the environment. Some days I am dismayed and astounded that we are still (25 years after I left school) struggling with many of the same problems (recycling, increased use of fossil fuels etc). However I am also hopeful. I have seen a real move into the mainstream in the last few years, of bold ideas and people willing to change their lifestyles – both for the planet and for themselves.  I have also seen there be the start of joined up thinking – and it is this that really excites me now. We as a global community are starting to see a connection between ourselves and our planet … and I think food – my other passion, has a really important role to play in this. I love cooking, I love food and I love experimenting. I also love feeding people things that make them feel good, on the inside and the outside. The more I learn about food, chemicals applied to food, medications used in people and in the food chain; the more I see how intertwined it all is to our general physical and mental health. .. And I want to be part of helping people join that all up and make a positive difference to our health and the health of our planet. My most used hashtag is #HumanHealth=#PlanetaryHealth. That about sums it up for me. “

2 thoughts on “Is Chocolate Real Food?”