I thought I would be able to find at least a few interesting recipes for sprouts in preparation for them being available on their stalks in many food shops this month.  However, the index in all my recipes books leaps straight from spinach to squid and not even Delia Smith’s Christmas book mentions them.  This was going to much harder to write than I expected…!

Their robustness in terms of being reliable to grow in cold weather must be one of the reasons why sprouts are still available despite many people not eating them other than on Christmas Day, and even then, often a little reluctantly.  This time of year, there is not a lot else going on in the vegetable garden apart from others in the cabbage family such as broccoli, cabbage, mustard, kale and horseradish.  Did you know they do taste much better when harvested after being frosted?  So maybe this year buy fresh at the last minute to maximise the chances of a cold snap before they were harvested.

They are very nutritious, being rich in essential vitamins such as Vitamin C and anti-inflammatory Vitamin K.  They are also one of the brassicas that have the highest levels of anti-cancer glucosinolate compounds and these compounds also support detoxification, particularly useful in the festive season.

Hopefully with sprouts, you have discovered the improvement in flavour that comes with the addition of seasoning and fat – be it a lovely knob of salty butter (or anchovy butter) or some fatty pork, bacon or pancetta.  They are also good tossed with butter-fried chestnuts.  Frying and roasting bring other options for cooking spouts over the usual steam or boil method but remember that you should wipe the sprouts rather than wash them as you don’t want any extra water getting into the pan.  Good combinations for finely sliced sprouts stir fried are:

The high heat cuts the sprouts’ bitterness by caramelizing them, creating crispness and a sweeter nutty flavour.  If you decide to fry them whole then you also get a nice contrast between a crispier outside and tender inside.  You could even try roasting them with crushed garlic and parmesan cheese, which is one of my favourites, not least because you just pop them in the oven and leave them to cook, helpful with so many other things needing attention in Christmas meals.

At the end of the season once the stalks have been picked clean of sprouts, the sprout tops can also be harvested and eaten.  Even to the most hardened sprout haters, the sweeter more delicate sprout tops might be a revelation.  These are the clusters of leaves that grow at the top of the sprouts’ stalk, which until quite recently used to lie forgotten in the fields after harvest or were fed to livestock.  Apparently now, they are really trendy and appearing on menus up and down the country.  Try maple glazed sprout tops.  Roll up the leaves into a bundle and roughly chop them.  Steam them for about four minutes before setting them aside. Heat a little butter in a hot frying pan and fry cubed streaky bacon for a few minutes until it begins to crisp up. Add the chopped sprout tops, a swirl of maple syrup and stir well, scraping up any bits stuck to the bottom of the pan.  Serve when nicely hot.

My sister eats sprouts raw, finely sliced in a salad tossed with clementines, celery, red onion and fresh herbs with a lemon juice and olive oil dressing.  Despite my taste buds really tingling at that prospect, unfortunately my digestive system complains about raw cruciferous vegetables and so sprout salad is not something I will enjoy…… 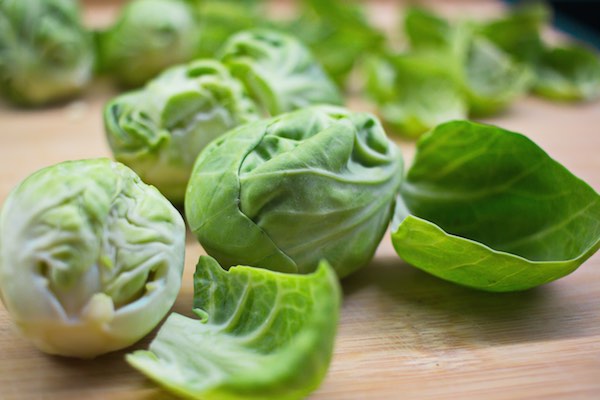 In the spirit of festive hilarity, I thought it might be worth explaining why sprouts do trigger wind in so many of us.  Generally speaking, wind from food is the result of it not being broken down easily in our stomach and small intestine.  This results in partially digested food making its way into our colon.  In the case of sprouts (and other brassicas) the reason we are challenged to break them down higher up our digestive tract relates to the enzymes needed to digest some of the complex sugars they contain.  We cannot produce these enzymes ourselves but the bacteria in our colon can.  It is the digestion of this carbohydrate in our bowel that produces the gas.  With brassicas, the wind is more stinky because these veggies are full of those anti-cancer glucosinolates – sulphur-containing defensive chemicals – that are also released as gas on digestion.  You can taste the sulphurous compounds yourself in the raw leaves, the bitter mustardy heat, there to deter animals from feeding on the leaves and indeed this is probably the very thing that puts so many people off eating them too.  As our microbiome is as individual as we are, everyone has a different population of bacteria in differing proportions.  Some, you could say, just have more fart-friendly guts!

If you don’t want to be the culprit of a noxious stench that clears the room this Christmas, eat only a small portion of cooked (not raw) sprouts.   Or skip them for now and on your list of constructive New Year’s resolutions put ‘nurture my microflora in time for next year’s annual sprout challenge’!

And on that happy note, Merry Christmas, may it be full of humour and of course delicious Real Food.

“I am a GP, wife and mother of two teenagers, who is and always has been passionate about the environment. Some days I am dismayed and astounded that we are still (25 years after I left school) struggling with many of the same problems (recycling, increased use of fossil fuels etc). However I am also hopeful. I have seen a real move into the mainstream in the last few years, of bold ideas and people willing to change their lifestyles – both for the planet and for themselves.  I have also seen there be the start of joined up thinking – and it is this that really excites me now. We as a global community are starting to see a connection between ourselves and our planet … and I think food – my other passion, has a really important role to play in this. I love cooking, I love food and I love experimenting. I also love feeding people things that make them feel good, on the inside and the outside. The more I learn about food, chemicals applied to food, medications used in people and in the food chain; the more I see how intertwined it all is to our general physical and mental health. .. And I want to be part of helping people join that all up and make a positive difference to our health and the health of our planet. My most used hashtag is #HumanHealth=#PlanetaryHealth. That about sums it up for me. “

One thought on “Ways with Sprouts”